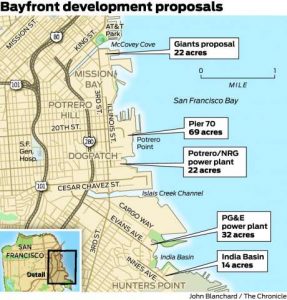 One by one, the mega-projects along San Francisco’s once-industrial southern bayfront have come alive. The challenge for the city is to find a way to make its newest neighborhood economically diverse and navigable for the thousands of people who will be moving in.

First there was the Hunters Point Shipyard, with its 12,000 planned homes, several hundred of which are now marching up the hillside. Then came development plans for the historic shipyards of Pier 70, a vast parking lot where Giants fans tailgate across from AT&T Park, at India Basin’s wild grassland and defunct power plants at Potrero Hill.

Throw in the Warriors’ planned arena at Mission Bay, and the projects proposed for the southern bayfront pipeline represent over 1,000 acres of land. Twenty thousand new housing units would be built, along with office space for 35,000 workers and 520 acres of new and renovated parkland.

Mayor Ed Lee’s Office of Economic and Workforce Development is pushing builders and city planners to look at the string of monster projects not as worlds unto themselves, but as parts of a single southern bayfront, said Ken Rich, who heads up development for Lee.

Five of the projects will come before city officials for approvals in 2017 and early 2018. These include the redevelopment of two shuttered power plants — Hunters Point and Potrero — as well as the Giants’ project, Pier 70 and the smaller scheme for Indian Basin.

The goal, said Rich, is to craft development agreements with each of the five developers that maximize affordable housing, coordinate open space, plan for sea-level rise, and ensure that there are enough trails, buses, bike lanes and streets to transport the 40,000 to 50,000 people who will be moving into the area.

The No. 1 goal, Rich said, is to make sure that at least a third of the housing is affordable.

“All of these proposed development projects are seeking to transform formerly industrial land with new open spaces, housing and commercial activity,” Rich said. “While these investments are inherently beneficial for the city, we are focused on claiming as much of that value as possible for our residents and neighborhoods.”

For Supervisor Malia Cohen, who represents most of the southern bayfront, the key will be to craft development agreements that help not just newcomers, but people with deep roots in areas like Dogpatch, Potrero Hill, the Bayview and Visitacion Valley. Cohen recently got “neighborhood preference” legislation passed that sets aside 40 percent of affordable units for people who already live in the neighborhood, meaning that the bayfront developments could provide housing for more than 2,000 existing residents.

“This approach will define the southern waterfront for generations to come,” Cohen said.